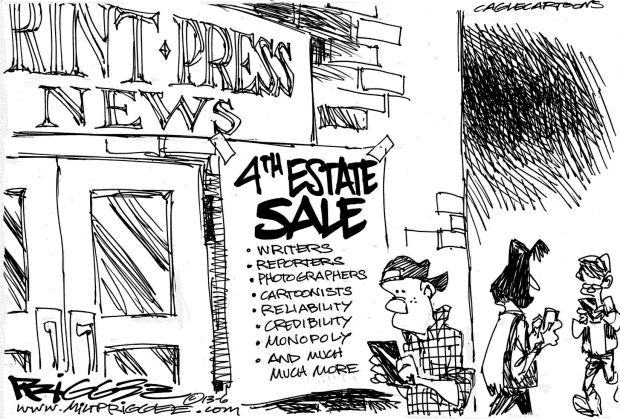 There have been lots of aspersions cast at the media over the past few decades with dyed in the wool members of both sides of the aisle claiming “bias” in coverage and an increasing furor that “mainstream media” or fourth estate, is failing in its duty to bring the public the facts.

The reaction of the general public to these allegations ranges from simply tuning out (the majority I expect) to loudly complaining about an error made in reporting especially when it conflicts with one’s prescribed political views to opting into “alternative media” outlets who claim to report the truth while employing few journalistic skills or ethics along the way.

It’s not clear to me that this constitutes “hate.” Mistrust? Disdain? Dismissal? Sure, depending upon who you’re talking to those things could be true. I certainly still trust the media an order of magnitude more than most government, surely Federal and State.

If that’s the current state, how did we get here?

The short answer is money. Once TV and radio networks, in particular, realized how much money there was to be made by feeding a continuous, 24 hour news cycle there was no turning back. The simple fact is, there isn’t enough “news” to fill this much air time and that led to the introduction of the pundit class, professional opiners who drone on about any news situation, often while it’s unfolding, and provide analysis or what’s called “color commentary” in sports broadcasting.

The net of this is, what used to be a tight 30 minutes of sourced, vetted, and edited material appearing every few hours has now been diluted and perverted with what amounts to trash entertainment to fill the time and sell ads.

The best media sources, in my opinion, remain local media. While living on the San Mateo Coast, the Half Moon Bay Review upheld high standards and was consistently recognized for their content and approach. Here in Ohio, the Yellow Springs News and WYSO uphold a similarly high standard of content and are also consistently recognized for their excellence.

At the broader level, I think we need to kick the non-news content out of the “news” category and be willing to consume our news content at a slower and more measured pace. Somewhere out there, someone must see this and be working on a product that can deliver the goods, I know I’d be willing to subscribe.